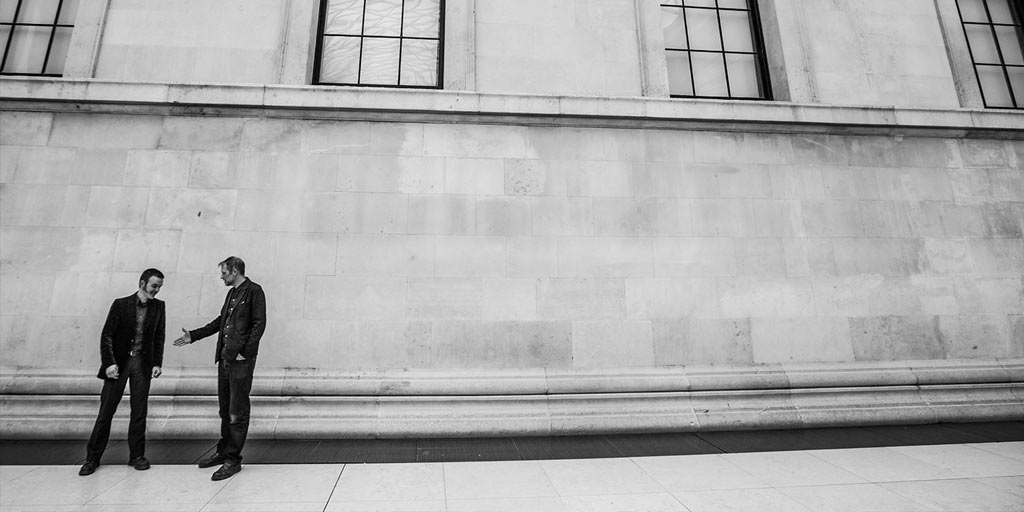 I will be a pilgrim

Arch Garrison is the acoustic vehicle of North Sea Radio Orchestra mainstays Craig Fortnam and James Larcombe. Their latest album I Will Be A Pilgrim sees songwriter and composer Fortnam examine his love for the countryside of southern England, aided by his trusty nylon string guitar and Larcombe’s piano and organ.
From the off it is apparent that Fortnam’s engagement with his chosen landscape –and with his chosen musical form – runs deeper than your average folky pastoralia. There are complex relationships at work on this otherwise simple collection of songs – most notably those between man, environment and the passing of time. Opener Where The Green Lane Runs, for example, makes reference to Captain Oates, hinting at hostility and the need for self-sacrifice in a seemingly hospitable world.

"I Will Be A Pilgrim' is another example of English folk music's ability to update endlessly, folding fleet modernity into a timeless, ever-rejuvenating continuum.....In aligning post-war cultural memories with a cherished ideal of old Albion, I Will Be A Pilgrim is like an ancient, steep-sided country lane, tarmacked sometime in the 20th Century, and still allowing traffic today.
For King of the Down
As musical director of the North Sea Radio Orchestra, Craig Fortnam has an almost unlimited palette with which to colour his compositions. Since 2000, this London-based chamber music collective (Whose line-up can vary from two to twenty members) have joined the dots between a certain strain of English classical, early baroque, folk, the kind of eccentric library and soundtrack themes celebrated by Trunk Records, and the art-rock tradition of bands like the Cardiacs, with whom NSRO have a shared pool of collaborators and supporters. I’ve enjoyed much of their work, appreciating their serious-minded blurring of boundaries between Bagpuss and Benjamin Britten, Vaughn Williams and Vernon Elliot, their evocation of a mythical, dream-like pastoral Englishness drawn as much, it seems, from London bedsit flights of fancy and memories of early 70s children’s television, as from the more highbrow realms of Aldeburgh and Glyndebourne. Too often, however, their performances can seem prim and overly polite, the reverent musical settings of poems by Tennyson and Blake coming across as merely chintzy and twee.
Happily, in his first solo venture as Arch Garrison, Fortnam has largely managed to avoid these tendencies, playing to the same compositional strengths as his work with the NSRO, but arranging his plaintive, bittersweet melodies in a much sparer framework. Accompanying himself on just acoustic guitar and Philicorda transistor organ, it’s a joy to hear him step up to the microphone, his Cotswolds accent charmingly unaffected and almost childlike in the way it conveys a sense of wonder and bewilderment at the natural world around him. Syd Barrett and Robert Wyatt are obvious antecedents, though the artist Fortnam most closely resembles vocally is Jason Pegg of Clearlake. Often slightly flat and missing notes happily, his singing couldn’t be more different to that of his wife Sharron, whose pure, cut-glass tones are a distinctive feature of the North Sea Radio Orchestra. And while she helps out in Arch Garrison too, most notably taking lead vocal on ‘Roman Road,’ it’s the undisguised flaws in Craig Fortnam’s own performances that lend this record such heart-warming emotional honesty.
Said honesty doesn’t mean, however, that King of the Down isn’t often deceptively complex. ‘Here’s to the End of the Road,’ seems at first like a wistful love song, but a closer listen reveals ambivalent, darker overtones: “I held you down while they cuffed you and took you downtown.” ‘The Days Don’t Feel the Same’ bubbles along like a mountain brook, but is an account of winter depression and everyday stress, partly relieved by the first stirrings of spring and the stark beauty of nature. Fortnam’s untrained voice is offset by his highly accomplished guitar playing, incorporating classical, modal folk and the distinct influence of Nick Drake into a unique and fluid whole. In the background the vintage electric organ impersonates woodwind and harmonium convincingly, and takes on a droning, fuzzy, neo-psychedelic quality on the gorgeously blurred ‘Peek-A-Boo,’ leading to a magical psych-folk coda.
Just as with the NSRO, King of the Down evokes a definite sense of place, specifically the rolling landscapes of Southern England, with all their characteristic landmarks and responsiveness to the changing seasons, and the histories and resonances to be found even beneath the bustle of the major population centres. “Take a walk from East Cheam to the cricket ground,” Fortnam suggests, on the 3 /4 time ‘Stone on the Pound,’ but mostly this record evokes the English countryside, and contemplation of its minor mysteries and low-key delights. “There’s a hole in the sky and I don’t know why,” he ponders on ‘The Vapour Trail,’ “But it could be our saving grace.” Such downbeat optimism is typical of the record. Away from the possibilities of the orchestra, Arch Garrison prove that less can be more, and that our limitations are often the very things that set us free.